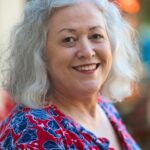 DEBBIE COLLIER (Mac) is a Marriage Family Therapist who taught music in the public schools for thirteen years before changing careers. Most recently she has taken on another position as Executive Director of Casa de Esperanza. Debbie has been involved with The Acting Company for over twenty years, working with every facet of production from being on the Board of Directors, running lights and sound, stage managing, directing and performing. She directed Joseph and the Amazing Technicolor Dreamoat, Little Shop of Horrors, Grease, and 12 Angry Men. Debbie was Music Director for Wizard of Oz, Oliver and Annie. Favorite acting credits include Sister Hubert in Nunsense; Mother Superior in Nunsense II; Mrs. Pearce in My Fair Lady; Mrs. Shellhammer in Miracle on 34th Street; Frankie Futrelle-Dubberly in Dearly Beloved, Christmas Belles and Southern Hospitality and Cora in Calendar Girls.