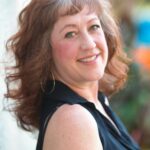 KELLY BARBER CUNNINGHAM (Gabby) has been performing almost her entire life and is thrilled to be back on stage with her talented cast mates and friends. She has performed opera, musical theater, and has now found a love for acting in plays. She has been seen recently on The Acting Company stage in The Seagull, Calendar Girls, Vania and Sonja and Masha and Spike, and The Charitable Sisterhood Christmas Spectacular. She also appeared at the Yuba College Theater in Our Country’s Good and The Curious Incident of the Dog in the Nighttime. Kelly’s first experience performing in the Yuba-Sutter area was as the White Rabbit at the 1989 Prune Festival in Alice in Wonderland Through the Looking Glass, under the direction of Pat Hill. Kelly says, “It is an honor for me to be on stage with Pat tonight in such a touching, relevant, and poignant story about friendship, aging and womanhood.”