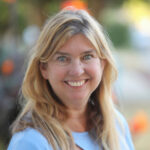 LISA BUSCHMANN makes her Main Stage directorial debut with this show. Lisa is no stranger to the stage—her first stage experience was as Dorothy in the Wizard of Oz when she was 10 years old at King Avenue School. In 1983, Lisa was in the pit orchestra of Carousel at Yuba City High School which, in part, spawned the precursor to The Acting Company—“ Theater ’86.” When she returned to Yuba City 16 years ago, she immediately became a patron of The Acting Company and made her first foray on The Acting Company stage as a guard in 12 Angry Men. Several shows followed including Patsy Price in Dearly Beloved and Christmas Belles, Church Lady in Inherit the Wind, Jessie Mae in Trip to Bountiful as well as several roles in Magic Theatre shows. She moved to the tech side for the Wizard of Oz and stage manager for various shows in Magic Theatre and Annie on the Main Stage. Lisa currently serves as the President of the Board of Directors of The Acting Company. Professionally, she is a Product Manager for a Large Data Management Software Company. She lives in Yuba City with her loving, incredibly patient and supportive husband, Wade Kirchner, and their equally loving, patient and supportive son, Jack—as well as several Gold Sox players, AF5 exchange students and a couple of dogs and a cat.