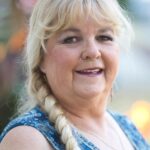 WENDY JELLSEY (Sil) has been in many productions at The Acting Company. She earned an Elly nomination for her role as the wolf in Little Red and the Riding Hoods. She made her Main Stage debut as Rhonda Lynn in Christmas Belles and reprised the role in Southern Hospitality. She even got to sing in A 1940’s Radio Show A Christmas Carol. Wendy notes that every play has been a new and different experience including appearing “nude” as Ruth in Calendar Girls and Tessie Tura in Gypsy. Most recently she played Roz in 9 to 5 the Musical. She says, “Every production has been filled with friends who are welcoming, gracious and understanding.”